The ‘Evolution of Video Games’ panel 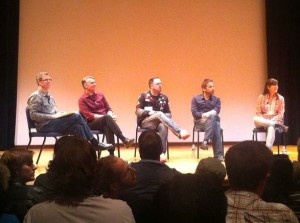 The Smithsonian American Art Museum began their The Art of Video Games exhibit on Friday. The Evolution of Video Games panel, headed by Chris Melissinos, kicked off the festivities with an all-star cast of industry experts. The first panel consisted of pioneers of the gaming industry. In attendance were the following:

Listening to these gentlemen speak about their game experiences was beyond fascinating. Trying to wrap your head around a world of gaming that was completely different is a difficult thing to do. Technologically speaking, games were minuscule in scope compared to today, and the limitations during that era seem trivial now, but it surely gave the games a certain je ne sais quoi in the character department. Here are a few choice quotes from the discussion.

“All the early games were 4kb [in size]. Comparatively, the icon for Firefox in OS X is 64kb.” – Chris Melissinos.

“Red on an NTSC screen bleeds very easily. Artwork was developed with that in mind to create images, and [artists] would use that to create images and the way they would move and animate.” – Mike Mika.

Honestly, you should watch the video just to get a sense of how far games have come. PS – yours truly makes a cameo, but I’m not telling where.

The second panel moved a bit further in time, dealing with where gaming is headed. In tow were:

Like the previous panel, this one was full of intelligent words. Paul Barnett’s notion that a unique “Golden Age” in gaming exists for every gamer is a fascinating one. According to Barnett, everyone’s Golden Age will have some sort of effect on them in life, whether they get into making games or not. It can influence the games you make, or just bring back vivid memories of what you were doing at a particular time.

Every gamer has a Golden Age. They have a period that they started becoming obsessed with games, and then they play them, and something happens. I think [the change has] something to do with when they have to pay the bills.”

However, everyone’s Golden Age mileage may vary; Kellee Santiago wasn’t too hot on the idea, so there are definitely nay-sayers. Her counterpoint to that idea was based on that game concepts are effectively recycled from generation to generation. It may sound like a bad thing, but it’s not. That’s just how ideas get improved upon. No one brought up the “good artists copy, but great artists steal” quote, but that holds true, even for gaming. How many Doom clones have we had over the years? One can make a case that almost every shooter is one.

Other topics of import included diversity in those who make games, expression, and disruption in distribution models.

“It’s nobody’s business on how I want to express myself.” – Ken Levine.

The video is available online here. PS – I do not make a cameo in this video. Sorry.

One response to “The ‘Evolution of Video Games’ panel”